Wetlands and People Plan Launch – Celebrating Wise Use of our Wetlands 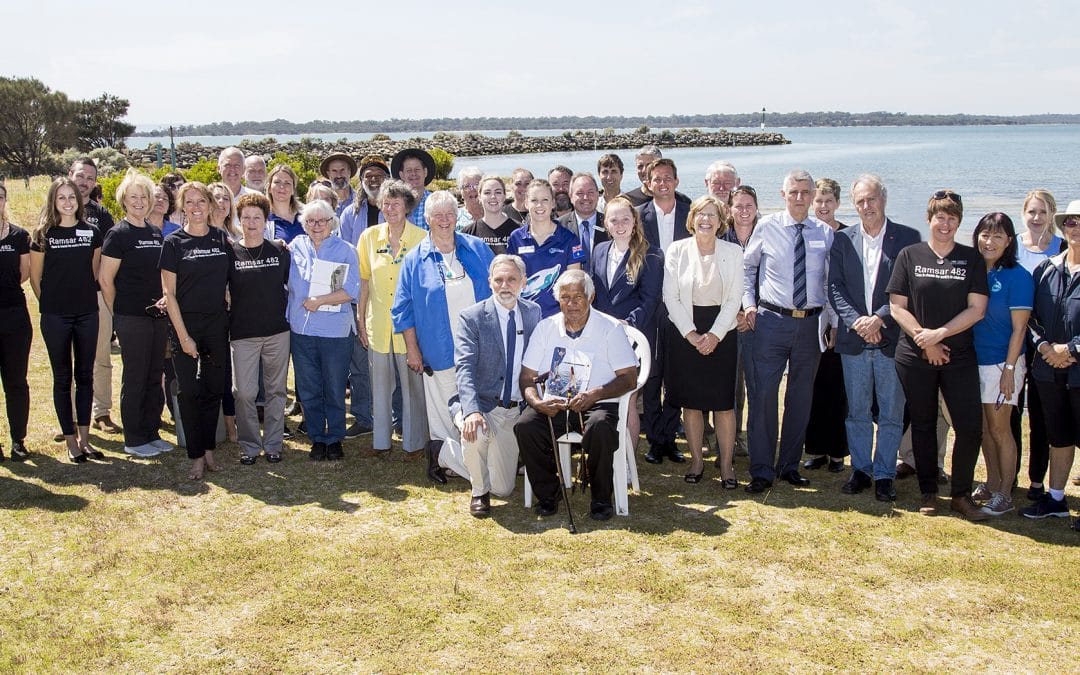 Wetlands and People Plan Launch – Celebrating Wise Use of our Wetlands

5 December 2017…On November 1st the Peel-Harvey Catchment Council officially launched Australia’s first CEPA Action Plan for a Ramsar-listed site.  The Peel-Yalgorup System ‘Wetlands and People Plan’ is a CEPA Action Plan for our wetland system, including our iconic Peel-Harvey Estuary.  The Wetlands and People Plan is a significant step towards “wise use” of our waterways, which are the basis of the economy of the Peel Region, and so valued by our community and visitors.

The Ramsar Site 482 wetlands, including the Peel-Harvey Estuary, Lakes Clifton, Preston, Mealup and McLarty and numerous other water bodies near the Estuary and coast are recognised as wetlands of international significance under the Ramsar Convention for their outstanding environmental, social and economic values. At the centre of the Ramsar philosophy is the “wise use” of wetlands; the conservation and sustainable use of wetlands and all the services they provide, for the benefit of people and nature.

The Wetlands and People Plan is for those who use the wetlands, those with businesses which benefit from the wetlands, and those who make decisions which affect the wetlands. The Plan applies communication, capacity building, education, participation and awareness approaches to better manage and protect the Peel-Yalgorup Wetland System.

Supported by funds from Lotterywest and led by PHCC Project Manager Thelma Crook, the Plan was developed with the support of an expert panel from a range of backgrounds including tourism, planning, local government, social sciences, youth, biodiversity and culture. Extensive consultation during development stages ensured stakeholders contributed to, and understood their roles in implementing the Plan for this complex wetland system.

In opening proceedings at the launch of the Plan, local Noongar Elder Harry Nannup led a moving Welcome to Country, “Welcome to my country, it’s a beautiful country. We work with the right people for this place; these are the right people”.

PHCC Chairman, Andy Gulliver, asked everyone to pause and enjoy the defining moment in the management of the Ramsar site, “You have to inform to inspire and then inspire to act.” Mr Gulliver said, “The PHCC and its partners have created Australia’s only site-specific stand-alone CEPA action plan under our international obligations to the Ramsar Convention. It has taken many years of persistent effort and commitment. The launch of the Plan is a watershed moment for our community. Over time it will change the way we think about and value our natural assets.”

“Thousands of jobs and billions of dollars of investment depend on the health of our waterways and wetlands”, he said. “It’s an unfortunate lesson of history that we often don’t realise what we’ve got until it’s gone. The ‘Wetlands and People Plan’ will inform the community about the true value of our wetlands. Well informed communities make better decisions.”

Natalie Goddard from Mandurah Cruises also spoke at the launch, explaining the huge economic contribution the Estuary makes to the local tourism industry, “We get to showcase this place, like nowhere else in the world, to 100,000 visitors every year. The visitors want to experience nature, the dolphins, plentiful fish and a healthy ecosystem”.

The Plan’s 4 Goals endeavour to create a brighter long-term future for the wetlands through encouraging wise-use, well-informed decision making, active stewardship and advocacy across all sectors. The Plan will also help the Australian Government meet its obligations as signatories to a number of international agreements (Ramsar, as well as the international Migratory Bird Agreements with Japan, China & the Republic of Korea – JAMBA, CAMBA & ROKAMBA).

PHCC CEO, Jane O’Malley added some local context, “We purposely launched the Wetlands and People Plan on the 1st of November, the opening of the Crab season. In doing so we celebrated the reason for the two-month closure to crabbing; wise-use to protect the breeding stock. This means that crabbing will be a recreational opportunity for this and future generations. This is part of the reason the fishery has gained Marine Stewardship Accreditation for both the recreational and commercial crab fishery.”

In his closing statement, Mr Gulliver stated, “During the development of the Plan a comment was made that, “As amazing as the Peel-Yalgorup Ramsar site is, it is astounding that our community and political leaders know so little about it”– we have great faith that working with our partners to implement the Plan this will no longer be the case.”

The creative spirit of the Waugal is believed to be responsible for the creation of rivers, lakes and wetlands and also a protector of the environment, a fitting reminder of the cultural significance of the Peel-Yalgorup Wetland System. In a poignant conclusion to the launch, Franklyn Nannup under Elder Harry Nannup’s guidance invited those in attendance to walk to the water’s edge, take a handful of sand and cast it into the water in a form of greeting to the Waugal, to assure the spirit we were there to do no harm, but here to help.