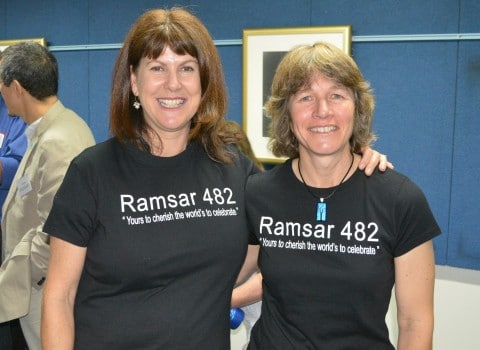 Ms Wilson was fortunate, as one of 4000 delegates from around the world, to have a private audience with Dr Young, who holds the position of Senior Regional Advisor for Asia and Oceania from the Ramsar Convention Secretariat.

Ms Wilson attended the congress in her capacity as Program Manager at the Peel-Harvey Catchment Council and said delegates heard current threats to the world’s Wetlands are similar to and greater than the decline facing global rainforests a generation ago.

“The same threats – population, urban development and non-sustainable use – are affecting Wetlands globally and it was interesting to note the awareness both inside and outside of the congress. The taxi drivers, the shuttle-bus staff – nearly everyone I encountered who knew that I was attending the Congress had the same comment. They all said ‘I’m not a Greenie but…I’m concerned about climate change and I hope your meeting gets it right!” I found that particularly interesting – it was as if they were seeking permission for acknowledging the environmental issues we face are real without being labelled accordingly.”

Ms Wilson also attended the Australian Ramsar Forum, which was held in conjunction with the congress and addressed by the Ramsar Secretary General, Dr Christopher Briggs.

“It was inspiring to see the themes we are pursuing here in the Peel-Harvey region of participation and collaboration being held as an example. What I took from attending these events is that by working together we really can arrest and reverse the decline. It also reiterated that here in the Peel-Harvey we are across world’s best practice in natural resource management in so many aspects of what we do in respect of community engagement, participation and collaborative management for protected areas,” said Kim Wilson.