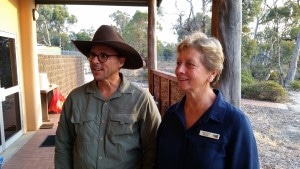 Included in this list are two small iconic Western Australian mammals, the numbat (Myrmecobius fasciatus) and the woylie (Bettongia penicillata ogilbyi). Both of these species are listed as endangered with the proposed Dryandra Woodland National Park being home to one of the few remaining natural populations of both species.

Department of Parks and Wildlife are continuing work to help restore and maintain healthy populations of numbats and woylies within Dryandra Woodland through building a new predator proof compound and programs such as Western Shield, along with other initiatives. Adjacent landholders are also working with the department, and now the PHCC to undertake feral animal control on their properties, which helps to give these endangered species a fighting chance.

In recognition of this and in an effort to complement the efforts of Parks and Wildlife, in April 2017 the PHCC confirmed their support of two projects which focus on feral cat and fox control on land close to and surrounding the Dryandra Woodland.

The first project, Farmers 4 Fauna, focuses on supporting private landholders neighbouring Dryandra. On the 6th of April over 30 landholders, local and state Government partners and the Threatened Species Commissioner gathered at Barna Mia Animal Sanctuary to learn more about the project and engage with the presenters from DAFWA, Parks and Wildlife, Project Numbat and PHCC.

PHCC Chairman Andy Gulliver said – “The PHCC was delighted to have the Threatened Species Commissioner come to WA to launch these exciting projects. Feral cats have such a significant impact on our native wildlife, and also detrimentally affect agricultural productivity so it was an easy decision to support these initiatives.  We look forward to working with our project partners and landholders to help save some of our most iconic native marsupials that we are so fortunate to have in our catchment, and we want to ensure that our children and grandchildren still have the chance to see our treasured furry friends in the wild”.

These projects are supported by the Peel-Harvey Catchment Council through funding from the Australian Government’s National Landcare Programme.