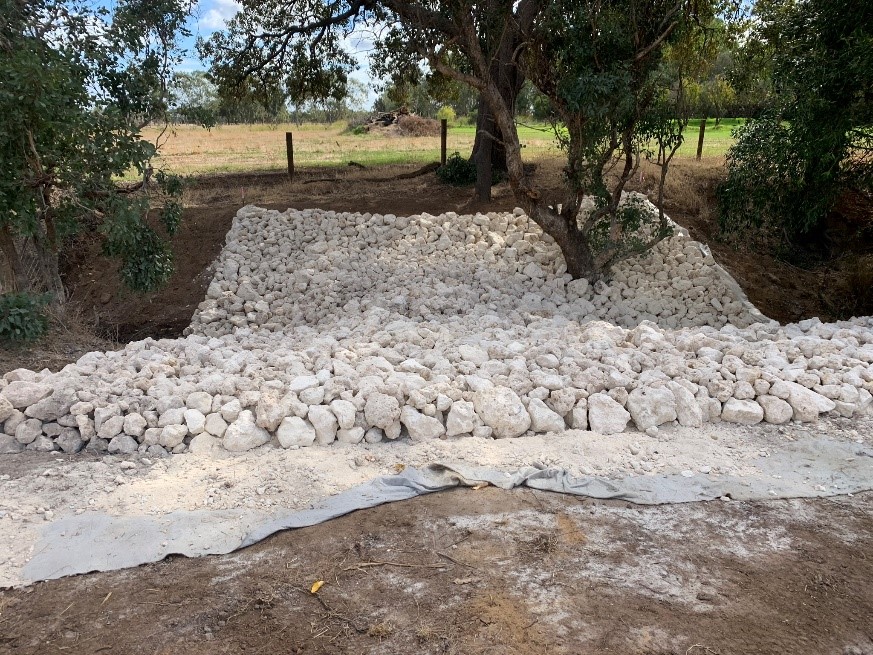 Two new riffles were constructed in Cookernup late in March 2020, designed to stabilise a reach of Weeks Brook North that had been severely impacted by erosion

Weeks Brook is a tributary of the Harvey River and is its first main tributary from the Darling Scarp downstream of the Myalup Diversion. At the riffle site, the catchment area of the brook is 700ha and peak flows in recent years regularly reach 1.5m³/s. However, in the earlier heavy rainfall period of the 1980’s, peaks reached almost 10m³/s, so the structures constructed needed to allow for these types of major floods as well; especially with the potential for ex-tropical cyclones passing through the South West.

The selected site on Weeks Brook North Branch has been subject to severe erosion as shown below.

Riffles are a River Restoration tool to reduce erosion. They are designed to mimic the natural function of a stream which should consist of a series of riffles and pools. Even constructed drains will begin to form riffles and pools if they are left alone. The rock riffles constructed on Weeks Brook, allow the faster flowing elements of stream to occur where they will cause the least erosion.

The two new riffles were designed by Matt Giraudo in 2019 and a contract let to Environmental Industries WA for construction which was undertaken in March 2020. These works are one of seven projects implemented under the Better Collaborative Drainage Management Project (otherwise known as the “Mayfield Project”). The Mayfield project is a component of the Regional Estuaries Initiative and designed improve the health of the Peel-Harvey Estuary by reducing discharges like nutrients to the estuary.

The two riffles on Weeks Brook are designed in ‘tandem’ with the overflow point of the downstream riffle (#2) being above the tail of the upstream riffle (#1). In-between the riffles is a long pool of slow moving water.

In the photo of riffle #1 below (a view looking upstream), water banks up behind the top of the ridge (its overflow point), and then flows across it and then down across the rocks to the right of picture. In the photo of riffle #2, water banks up behind the riffle all the way back to Riffle #1, and then flows across Riffle #2 from right to left.

Construction supervision of the works was not as straight forward as normal. PHCC’s drainage engineer, Peter Muirden (who is based in Melbourne), had expected to fly over to supervise the work, however the coronavirus travel restrictions eliminated that option and necessitated an on-line solution: the contractor uploaded videos of the works while on-site, allowing Peter to view the project as if he was there, and pushback for additional information like surveyed levels.

Michelle Mullarkey (PHCC’s field technical officer) followed up later by setting up photo-monitoring points where the impact of the new riffles on erosion can be monitored: particularly this coming winter. However her travels to site were also disrupted by coronavirus problems as while the site is in the Peel-Harvey catchment, it is not in the Peel Development Commission area, so she had to arrange a work verification letter and pass through checkpoints!

Work on the riffles is complete and we now await winter flows to monitor how effective they are!