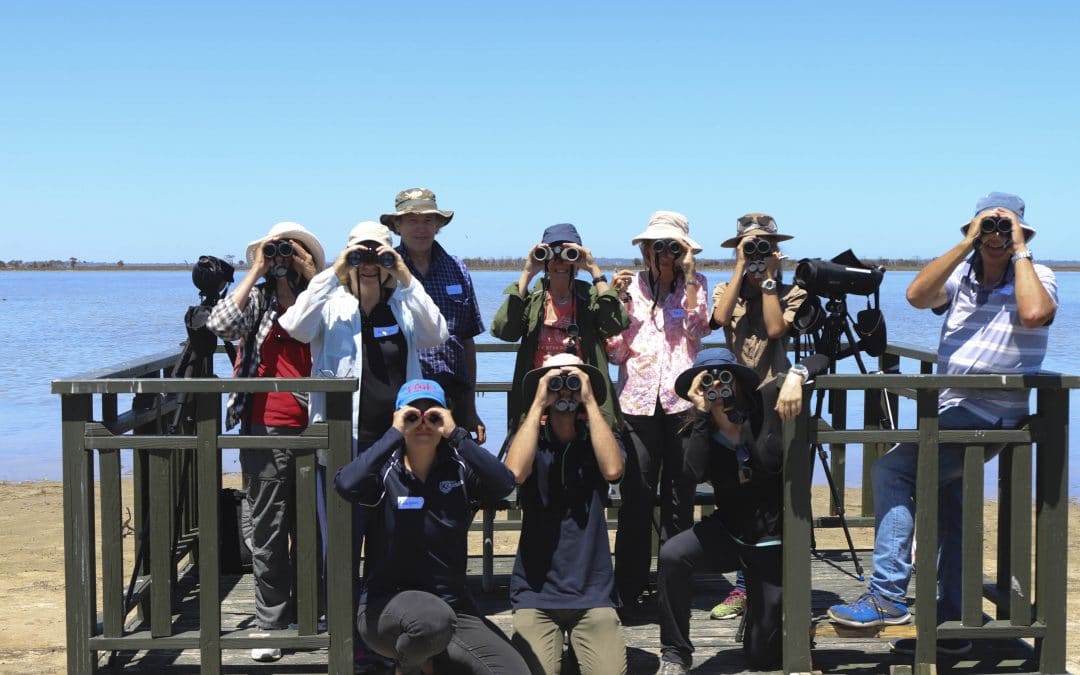 Every year we host the Shorebird Identification Workshop in January, this year was the 11th Workshop PHCC has run. The workshop was conducted over two days and involved a mix of classroom learning and excursions to the Peel-Yalgorup wetland system (Ramsar 482) to survey and identify shorebirds.

For 10 years, Ornithologist Bill Rutherford has facilitated the workshop but this year his colleague Nick Hart jumped in the hot seat to facilitate. Nick, also an Ornithologist who specialises in shorebirds, has taken part in previous shorebird studies in the Peel Area.

Twelve participants were in attendance for this year’s workshop including two PhD students and two staff members from Mandurah Cruises. Nick introduced the main shorebirds of the Peel-Yalgorup wetland system to the group. Shorebirds are often thought of as the most difficult group of birds to identify as many of them seem similar in appearance. Often the feathers are a mix of sandy brown, grey and white colours. For beginners, it is hard to distinguish a point a difference and tell species apart.

However the devil is in the detail with shorebirds, Nick began the workshop with a presentation that demonstrated to the group that by looking closely at the physiological features of shorebirds you will learn how to identify the species. The colours and patterns of their feathers, the shape of the beak, the size of the bird are all important when identifying the different species of shorebird. Shorebird behaviours are also key when identifying a species. How the bird feeds and how it moves around in the mudflats all hold the secret to what bird it is.

For example, the Red-necked, (Calidris ruficollis) is a small migratory wader, one of the Peel’s most common shorebirds but also the smallest. Weighing a tiny 22 grams, this tiny bird would fit in the palm of your hand. The key features of this bird are black legs, a small eye and the bird stands around 15cm tall. Identifying shorebirds is a fun process of elimination and once you begin to understand the key attributes of each bird you then have the knowledge to then begin to identify shorebirds in the field.

After the classroom session was complete the group headed out to the wetland visiting Samphire Cover, Nairns Bird Hide and Creery Wetlands to survey the sites and practice using birdwatching equipment such as scopes and binoculars. Among the variety of shorebirds spotted was an Eastern Curlew at Coodanup.  Eastern Curlews are Critically Endangered under the Federal EPBC Act but can be seen in the Peel-Yalgorup wetland system, a lucky find. The Peel-Yalgorup wetland system is home to many endangered shorebirds the Fairy Terns are another endangered shorebird species. Currently, local projects are in progress that aim to help better understand and protect these birds in a bid to conserve their numbers. PHCC has supported City of Mandurah’s project to create a Fairy Tern Sanctuary in the Mandurah marina, there is also a project currently being run by Birdlife and supported by PHCC that looks at the factors of bird disturbance across the Ramsar Site.

The participants grew in confidence over the two days. Robyn Devenish an active member of the community and passionate conservationist commented “In the beginning, I was wondering how I was going to learn everything but once we went out to Samphire Cove and I looked through the scope I could identify birds. I’ve seen a variety of birds I’d never knew existed and that has been a big thrill. I can recommend this to anyone else as I was a real beginner.”

The participants of the workshop and are now equipped with the skills to identify these birds and take part in the biggest Citizen Science event in the Peel region and Australia – Shorebird2020. The Shorebird 2020 Count is a national shorebird monitoring program throughout Australia which aims to gain a better understanding of the populations of the nation’s shorebirds by surveying key sites around Australia.

The Shorebird2020 Count took place across the entire 26,000 Ha of the Peel-Yalgorup wetland system on the 10th of February and was conducted by over 60 volunteers.

The workshop is supported by funding through Mandurah Cruises and the Australian Government’s National Landcare Program.