SHARE in The Shed: River Rescue – Bringing new life to our estuary 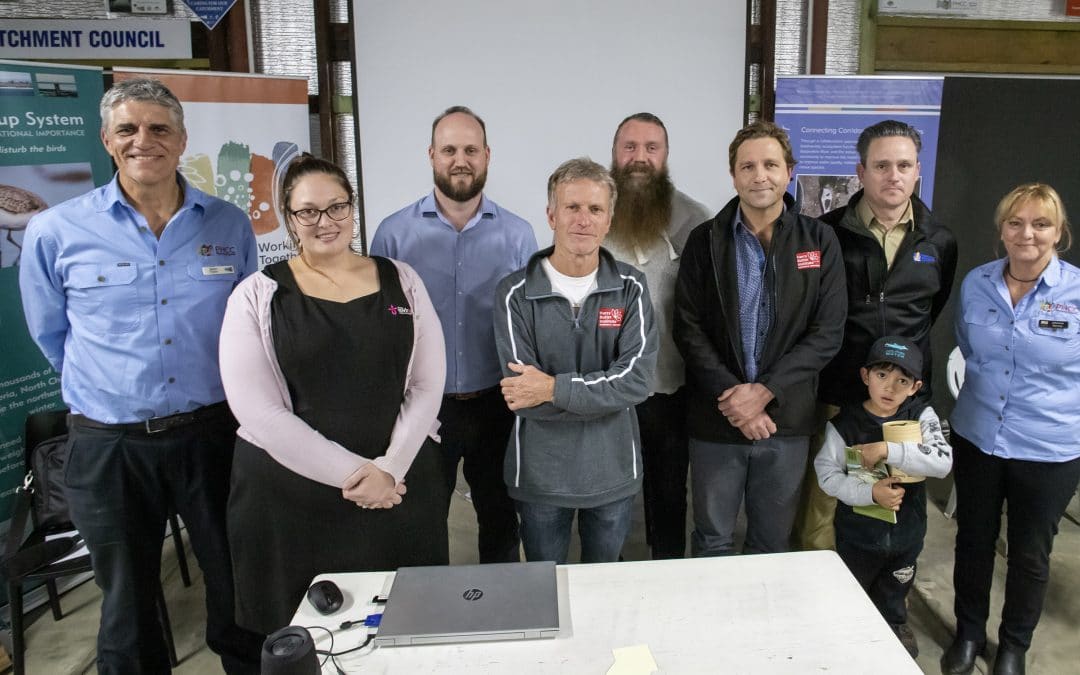 More than 60 people attended the latest instalment of PHCC’s S.H.A.R.E. in the Shed series on 18 July entitled River Rescue: Bringing new life to our estuary.  Dr Steve Fisher (PHCC Science and Waterways) set the scene for evening by describing the values of the Peel-Yalgorup Wetlands Ramsar Site (Ramsar 482) and an overview of the projects PHCC is undertaking to protect the wetlands, including the Peel-Harvey Estuary, and the Serpentine, Murray and Harvey rivers that drain into the estuary from the ever-present threat of inappropriate land use.

Steve’s presentation was followed by six others from scientists who are collaborating with PHCC to deliver these projects or are working on related projects of their own.  First up was Dr Steve Beatty (Murdoch University) who described the surprising diversity and richness of species of native freshwater fish and crayfish he has observed in his investigations of rivers of South Western Australia, including in the Harvey River.  Dr Alan Lymbery, also of Murdoch University then told us the story of the endangered Carter’s freshwater mussel and how as a juvenile it imbeds itself into fish for transport through our river systems.  He also told us about the experiments he is doing to assess the role that mussels might play in improving the water quality of our rivers through filtering out nutrients and other contaminants as they feed.  Rhiannon Brown from Envirapest described the work she is doing in partnership with PHCC, Landcare SJ and Department of Communities using floating booms to control the spread of the noxious weed water hyacinth in the Serpentine River.

In what we call a speed-dating session, Ross Perrigo from Urbaqua then gave us a quick rundown of the progress on developing a River Action Plan to guide future restoration works on the Serpentine River between the estuary and Lowlands Nature Reserve.  Dr Alan Cottingham (Murdoch University) described the fragility of black bream stocks in the Murray River and how in partnership with John Tonkin College, we are lending a helping hand negotiating their vulnerable early life stages through an aquaculture program culminating in the release of 10,000 juvenile bream into the river over the next two years.  Cameron Craige from Department of Biodiversity, Conservation and Attractions then told us about the partnership with DBCA, PHCC and the Mandurah Volunteer Rescue Group leading to the installation of four surveillance cameras on the lower Serpentine River to improve response and rescue time when dolphins strand in the shallows.  The evening finished with a Q&A session with the panel after which we carried on the conversation over a light supper.

All of the projects described were funded by the Alcoa Foundation; the State Government of Western Australia through the Royalties for Regions Program; or the Australian Government’s National Landcare Program / Regional Land Partnerships, which also provided the funding for the event.

The next S.H.A.R.E. in the shed will be hosted by PHCC on 19 September entitled Noongar Participation where we will discuss how to better share knowledge with the traditional custodians of our land.