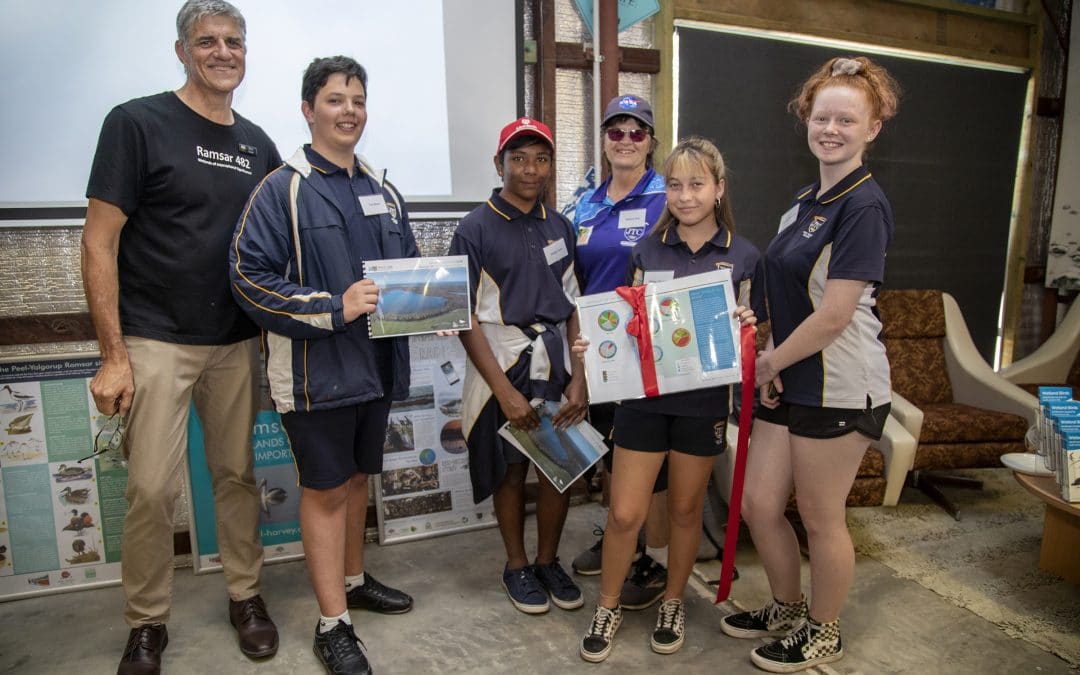 The Peel-Harvey Catchment Council has launched the first Report Card on the health of the Peel-Yalgorup Ramsar Site (Ramsar 482). The Report Card reinforces the concerns held by the catchment council for the health of our internationally significant wetlands.

The Ramsar 482 Report Card uses a traffic light system to compare information collected from monitoring programs with Limits of Acceptable Change that have been set for the site. These include measures of water chemistry and nutrient concentrations, as well as the abundance of species of plants and animals that indicate the health of the system such as saltmarsh, seagrass, fish, crabs and birds. If a measured value doesn’t meet the limit of acceptable change it indicates a decline in the ecological condition of the wetlands which, without action to restore it, may lead to an inability to meet one or more of the Ramsar criteria for the site.

The Peel-Yalgorup Ramsar site (Global site #Ramsar482) includes the Peel-Harvey Estuary, the freshwater lakes Lakes Mealup and McLarty and the Yalgorup Lakes, a string of 10 lakes in the Yalgorup National Park.

Ramsar sites are designated as “Wetlands of International Importance” under the Ramsar Convention on Wetlands. The Peel-Yalgorup Wetland System was recognized as a Ramsar Site (Ramsar 482) in 1990 when it met six of the nine criteria. Since 1990, threatened ecological communities including the Lake Clifton thrombolites, have been identified in the Ramsar Site and so it now meets seven of the nine criteria

Dr Steve Fisher, Science Advisor at PHCC says that the message the report card is sending is concerning. “Only 14 of the 81 Limits of Acceptable Change are being met by the measured values with five borderline and 13 that have not been met. These mostly relate to the water chemistry of the Peel-Harvey Estuary and the abundance and diversity of birds species that use the Ramsar Site. So while we have a good understanding of these, we just don’t have enough information available to make a call on how we are tracking against the other 49 limits which mainly relate to other water bodies in the Ramsar Site. For example we know that Lake Clifton has become much saltier over the past three decades, but we don’t have the data to understand what effect that is having on the ecology of the lake, including the thrombolites.”

This message was echoed by Desi Kanth and Troy Wood, students from John Tonkin College’s Surf Science Program who helped launch the report card. “The report card helps us to understand how important the wetlands are to people, to migratory birds and to the Peel-Harvey estuary dolphins who all rely on a healthy system. It also shows us and how fragile the wetlands are and how much we don’t know.”

This first report card sets the baseline for the current condition of the Ramsar Site based on verified data collected by government agencies, researchers and community volunteers to 2018.  PHCC intends releasing updates every two years to communicate to the community and to decision makers how the health of the system is trending and to show if new monitoring programs have been implemented since this baseline was established.

PHCC Chair Caroline Knight sums it all up: “It is important that we base management decisions for the Ramsar site on sound evidence backed by science. We will continue to collaborate with government agencies, researchers and the community to try to fill some of the gaps in our knowledge and will update the report card as the information becomes available.”