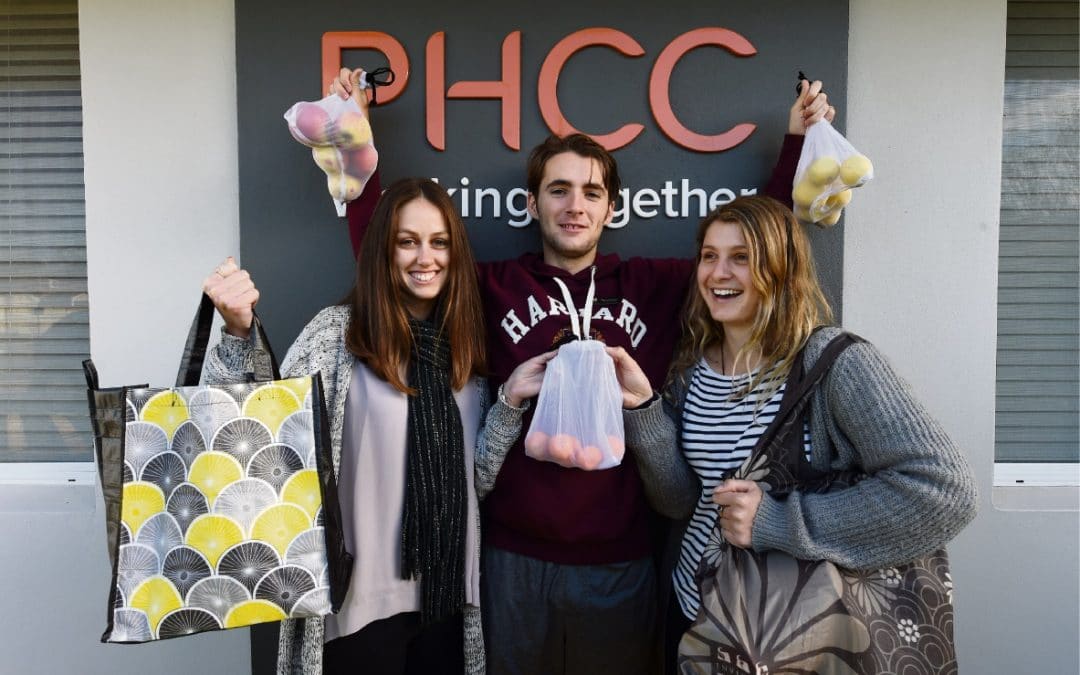 The 1 July ban to be implemented by state government will make it illegal for shops to provide plastic bags which are less than 35 microns.  A micron is one-millionth of a metre, and bags less than 35 microns are what we currently see at most checkouts.

The PHCC wants the ban to extend to all plastic shopping bags that are less than 70 microns thick so that retailers and shoppers are strongly discouraged from shifting from thin plastic to glossy thick plastic bags that may still be available after 1 July under the government’s current plans.

We want to see a complete shift away from single use plastic shopping bags in the long term, said PHCC Chairperson Andy Gulliver.  Government and community leaders need to support and encourage the use of re-useable shopping bags that can be used over and over again.  This is a simple action that each and every one of us can do to look after the environment, everyday!

At present, plastic shopping bags and other plastic products are littering our beautiful environment and don’t degrade any time soon, especially in a landfill.  And when plastics get into the Estuary and marine environment, they can injure and kill wildlife, and get incorporated into the food chain.

Local community groups in the Peel-Harvey Catchment are frustrated by the amount of plastic litter that is ending up on foreshores, beaches, roadsides and bushland.  In one 2 km stretch of Coodanup foreshore for example, volunteers collected 127 plastic packaging items in one rubbish pickup event in 2017, of which 60% were plastic bags.

So important is the issue that the Mandurah-based Youth on Leadership group has devised a campaign to raise community awareness on the impacts of single use plastics on the local environment and what can be done to reduce reliance on single use plastics.

It’s fantastic to see the Youth in Leadership Group’s Heal Peel campaign being developed, said Andy.  Young people are showing us adults the way with their marketing campaign. We hope that the State Government puts as much effort and enthusiasm into a state-wide awareness-raising campaign, with a much bigger budget of course.

Other states have shown that a 35 micron bag ban doesn’t necessary reduce the amount of plastic bag litter, and in SA and NT it has been shown to make little if any difference. That’s why the government needs to get to a 70 micron bag ban, and follow it up with a strong public awareness campaign, said Andy.  The key messages are: bring your re-useable bags to the shops, store them in the car when not in use, and don’t litter our beautiful state!