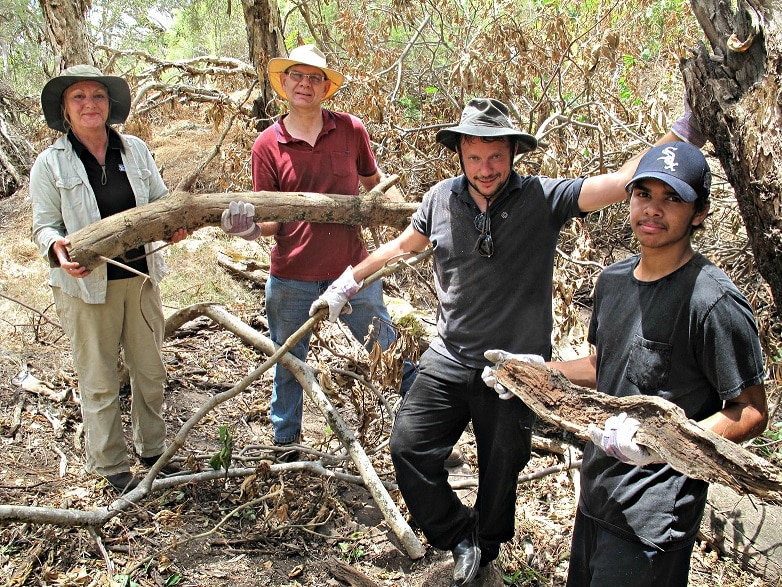 17 December 2015…A co-operative busy bee was held this week at the Battle of Pinjarra Massacre Site. The busy bee was co-ordinated by the Peel-Harvey Catchment Council with help from the Shire of Murray and the Murray Districts Aboriginal Association and successfully removed tonnes of woody weeds from the culturally significant site.

The site is on the banks of the Murray River and is one of the most significant historical and cultural sites in the Peel-Harvey, but currently is very poor condition as it is dominated by various invasive weed species. The Peel-Harvey Catchment Council (PHCC) is managing the site’s enhancement project under their Rivers 2 Ramsar project which aims to restore and protect native vegetation on identified river corridors.

Andy Gulliver, chairman of the PHCC, said the busy bee marked the commencement of an overarching management plan for the site.

“The work achieved this week has been extremely important. The river banks are clogged with invasive weeds – Blackberry, Honey Suckle, Wild Fig, Fumeria, Bridal Creeper and Kikuyu. Several species including large fig trees were targeted using a cut and paint method and the debris was dragged up the steep bank to be disposed of by the Shire of Murray crew,” said Andy Gulliver.

“Follow up work will include ongoing management of the Blackberry, which is a highly invasive species, and once this is under control we will revegetate the site with native species. I commend the efforts of our PHCC Rivers 2 Ramsar project officer Johanne Garvey for her hard work to get this project off the ground and to build such positive relationships to work together on the site,” he said.

“We envisage an interpretive sanctuary where the community can gather and reflect in a natural environment more like the original landscape of this site,” said Karrie-Anne Kearing.

“The removal of heavy woody weeds has made a substantial improvement to the site which is environmentally, culturally and historically significant to Pinjarra and Western Australia,” said Dean Unsworth.