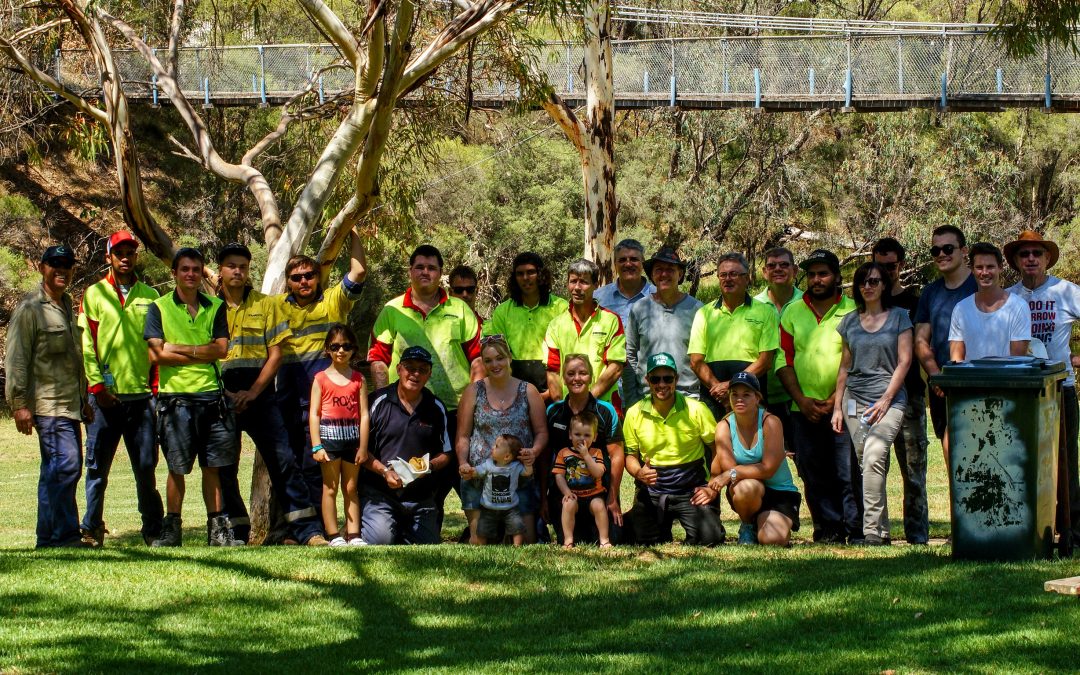 Clean Up participants worked together on three sites around Pinjarra to remove rubbish.

24 March 2016…Over nine cubic metres of rubbish has been removed from waterways and significant sites around Pinjarra by 50 community volunteers, as part of the month long Clean Up Peel Waterways initiative.

Clean Up Peel Waterways, a joint community Clean Up Australia project for the month of March involves eighteen community groups and supporters coming together to improve the health of the Peel waterways through separate events.  The project was initiated by Friends of Rivers Peel and is supported by the Peel-Harvey Catchment Council (PHCC) through funding from the Australian Government.

PHCC chairman Andy Gulliver said the annual Pinjarra clean up day was the best yet.

“Our thanks go out to the 50 community volunteers who came together to pick up, pull out, and pack up the rubbish collected.  This year, we even found a discarded wheelchair.”

“Discarding rubbish into our rivers and wetlands has a significant impact on the overall health of our waterways, including the Ramsar listed Peel Inlet and Harvey River. Clean up days like this raise awareness of these issues and hopefully discourage people from disposing of rubbish in our fragile environment,” he said.

The Shire of Murray and the Peel Harvey Catchment Council work with a number of stakeholders including community groups and volunteers throughout the year to improve the health of the Murray River.

“Several tonnes of waste were collected throughout the Shire. There were six other community Clean Ups which took place in Coolup, North Dandalup, Dwellingup, South Yunderup, Barragup and Nambeelup, including the Friends of Rivers Peel event organised by Colin Elton which removed two tonnes of rubbish from the Murray River,” she said.

“The Shire recognises and supports the community’s desire to preserve our enviable natural environment and thanks the community members and groups who selflessly volunteered their time to assist with 2016 Clean Up efforts.”