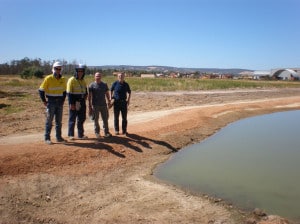 The Peel-Harvey Catchment Council (PHCC), in partnership with the Department of Water and the Water Corporation, has significantly reduced nutrient discharge from the Waroona Wastewater Treatment Plant (WWTP) as a result of its ongoing trial of an innovative swales system.

The project involved construction of a 700mm purpose built swale designed to reduce total phosphorous and nitrogen in treated wastewater. The new swale system is part of a 12 month trial, and has been operating for three months with some encouraging results to date.

Peel-Harvey Catchment Council Chairman Jan Star said although the existing woodlot had been initially effective in reducing nutrients, it required a significant upgrade, and the swale systems provided a good alternative while the Water Corporation considered options for the woodlot site.
Jan Star said the capturing of phosphorus and nitrogen prior to its entry into waterways was vital for the health and sustainability of waterways.

“The new swale system is part of a 12 month trial, and has been operating for three months with some encouraging results to date,” Ms Star said. “The swale system is preferred as other trials have been successful and it is a relatively cheap, effective and transferrable environmental management option.

“The site will be monitored monthly, with testing of both the swale and water quality to assess the effectiveness of the project in reducing phosphorous and nitrogen concentrations. It is great to see partnerships like these produce good results.”

Department of Water Waterways Program Manager Bob Pond said there had been some very good results achieved in this multi-agency project.

“The department applied for and received State and Commonwealth funding for these projects, and then worked with the PHCC as the on-ground delivery agency,” he said. “It was a very productive partnership.”

Water Corporation South West Regional Manager John Janssen said he was pleased the partnership project had already proved successful and looked forward to more positive results throughout the duration of the trial. “It is great to see such fantastic results in a very short period of time.”

The trial of swales at the Waroona WWTP forms part of the Filtering the Nutrient Storm program funded by the Australian Government’s Caring for our Country initiative, with additional support from the Water Corporation. The trial concept is based on the results of an earlier trial undertaken by the Peel-Harvey Catchment Council and the Department of Agriculture and Food at a small drain in Coolup.

Peel Harvey Catchment Council deliver a range of environmental projects across the Peel Region with the aim of improving water quality and protecting and improving biodiversity within the region, including overseeing the region’s internationally recognised Thrombolites.