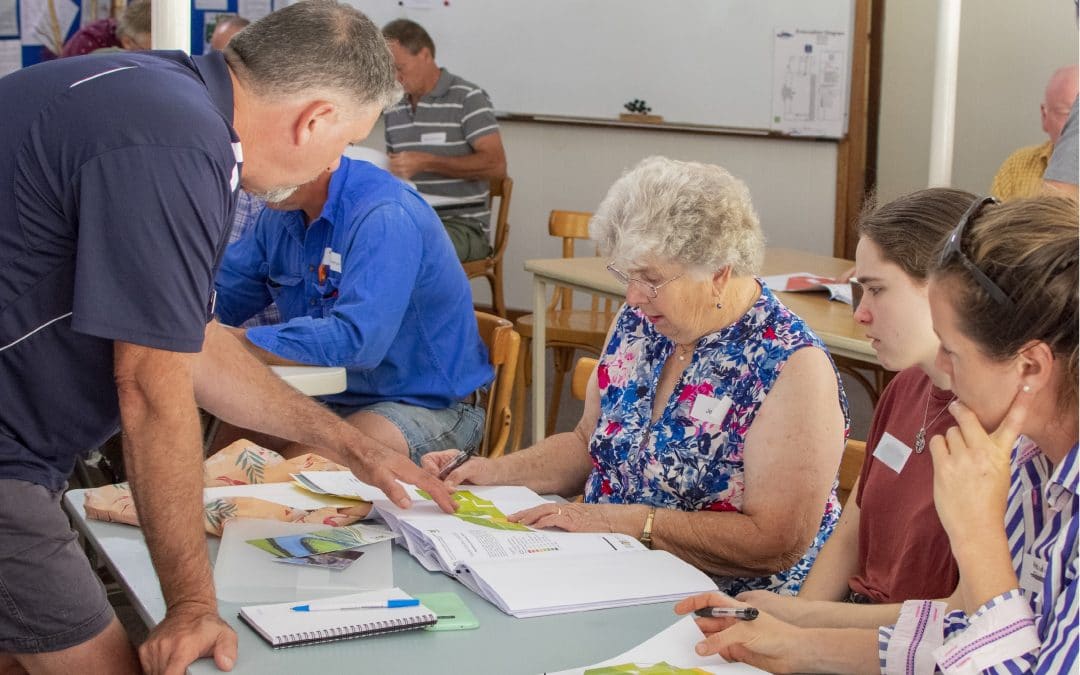 Dave Rogers from Department of Primary Industries and Regional Development shows Jennifer Colum from Coolup how to interpret her farm nutrient maps.

Twenty-seven farmers from across the Peel-Harvey have been discovering exactly what their soils require to achieve maximum production while protecting local waterways.

Participating farmers attended the workshop held on 18 February in Waroona to receive colour coded maps that clearly show the nutrient status of each paddock and which nutrients are holding back production.

“Results from the Peel-Harvey Catchment soil tests indicated that most farmers do not need to add phosphorus to their fertiliser mix this year, which is a great saving to the hip pocket and our waterways” said David Weaver, Principal Research Scientist at the Department of Primary Industries and Regional Development.

“Farmers can often improve their productivity by knowing exactly which soil conditions are limiting their production, but farmers can’t know this without first testing their soil” said Mr Weaver.

“What we’ve seen over the last ten years of running similar programs throughout the state’s south west is that most soils already have more than enough phosphorus to achieve maximum production without applying any more phosphorus fertiliser. Instead they need other treatments, for example to address acidity or potassium deficiency”.

Caroline Knight, Chairperson of Peel-Harvey Catchment Council confirmed that farmer response to the program has been very positive, with farmers realising the benefits of regular soil testing to determine optimal fertiliser and liming inputs to boost production.

“And the bonus is that it’s a win-win for agriculture and the Peel-Harvey Estuary. A long history of fertiliser use on farms in the catchment can be harmful to the waterways as excess nutrients, not used by plants, can run-off or leach into drains during high rainfall periods, causing a flushing of nutrients into rivers and estuaries. This ultimately means more algal blooms and low oxygen levels which can cause fish kills” said Cr Knight.

The workshops are a part of the Regional Estuaries Initiative’s soil testing program that encourages farmers to use independently accredited soil testing when deciding how much and what type of fertiliser to apply.  The program is a collaboration between the Peel-Harvey Catchment Council, Department of Water and Environmental Regulation, and Department of Primary Industries and Regional Development.

The Regional Estuaries Initiative (REI) is a $20 million Royalties for Regions program led by the Department of Water and Environmental Regulation.

The REI fertiliser management program partners farmers and industry groups with local catchment groups to reduce the nutrient run-off from farms to benefit both farmer’s productivity and water quality in our estuaries.

For more information on the Regional Estuaries Initiative visit rei.dwer.wa.gov.au