Clean Waterways are No Accident! 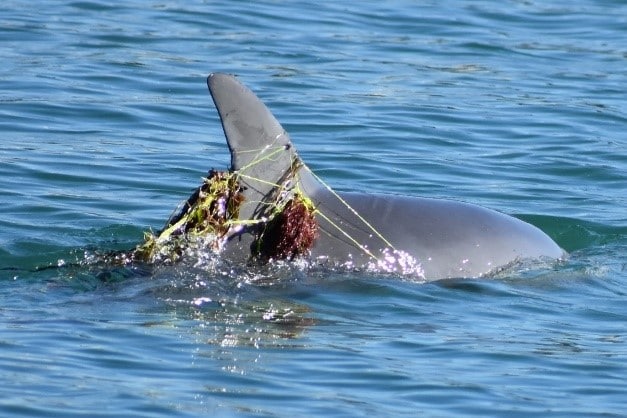 Entanglements in litter like fishing line can cause injury and sometimes even death for dolphins in our waterways. Image courtesy of Mandurah Cruises

In response to the death of Luca, a young member of Mandurah’s resident Indo-Pacific Bottlenose Dolphin population, a group of committed community members have come together to develop and launch a positive behaviour change campaign to inspire litter prevention for the benefit of our aquatic life and ecosystems. The Clean Waterways Working Group have developed a series of campaign videos that were officially launched at the recent WA Wetlands Management Conference, and are now rolling out across social media platforms.

Luca the dolphin was tragically killed in 2019 as a result of multiple fishing line entanglements. A young and curious dolphin, Luca loved to play in seaweed and as a consequence his dorsal fin was repeatedly caught by fishing line. At the time, the Mandurah Volunteer Dolphin Rescue Group and other community groups and members worked with the Department of Biodiversity Conservation and Attractions to disentangle Luca, however unfortunately he did not survive his injuries.

In response to his death and subsequent entanglements of other members of the dolphin population, a collective of individuals and community group representatives banded together to take positive action to prevent future entanglements for dolphins and other wildlife. Their first initiative was the annual Luca’s Legacy community clean up event which has taken place in October for the last two years.

The latest product of this group is a series of five short campaign videos designed to inspire behaviour change towards preventing litter entering our waterways, and addressing litter through collective action. The videos educate viewers about the ecological values of our waterways including information about wildlife such as Indo-Pacific Bottlenose Dolphins and migratory shorebirds, as well as the importance of our waterways for recreational activities. They tell the stories of people that are actively involved in addressing the issue of litter through community clean up events, picking up litter when they’re out and about on the waterways, and taking practical steps to prevent accidental littering.

The Clean Waterways Working Group members gave a presentation at the recent WA Wetland Management Conference held in Mandurah on 16th March 2021, where they officially launched the video series. The members of the group include representatives from Estuary Guardians, Mandurah Volunteer Dolphin Rescue, Mandurah Cruises, Coastal Waste Warriors, Tackle World Miami, Sharon Meredith Photography, City of Mandurah and Peel-Harvey Catchment Council. The videos were produced by Sharon Meredith Photography and feature comments from members of the working group as well as beautiful wildlife footage kindly provided by our caring community.

The videos will be rolling out over the coming month on the social media pages of the working group members. The group invites you to view the videos and share them far and wide throughout your networks to help inspire positive behaviour change to prevent wildlife entanglement and ingestion due to litter and especially plastic pollution.

Please follow these pages to see the videos as they come out: